Quiboba is the best educational language game for school and at home. For the founder and creator of Quiboba, Angelique Gerretsen, Stoere Binken Design designs a catchy branding. From the brand identity to the isometric cities, the packaging and the custom website with webshop.

We designed a set of isometric cities for Quiboba. Every language game has its own city, map, colors and iconic building. The isometric letters, the language of the game in question, symbolize buildings in a city. In between, we placed an icon of the most characteristic building from that particular country, such as the Big Ben for England and the Eiffel Tower for Paris.

For each language game, we used the main colors from the flag of that country. These are used in the isometric letters. The extra color harmonizes with these main colors, but also with the other languages, building a complex color system. The different languages in the Quiboba game must be clearly distinguishable visually.

Isometry is a spatial drawing form without perspective. The lines run parallel to each other and do not run to a vanishing point as with a perspective drawing. This creates a kind of 3D effect that gives a feeling of depth. 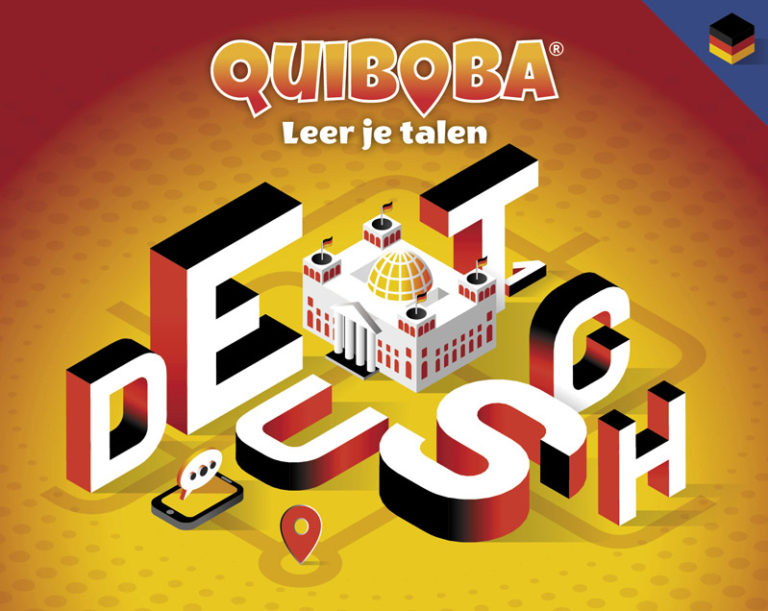 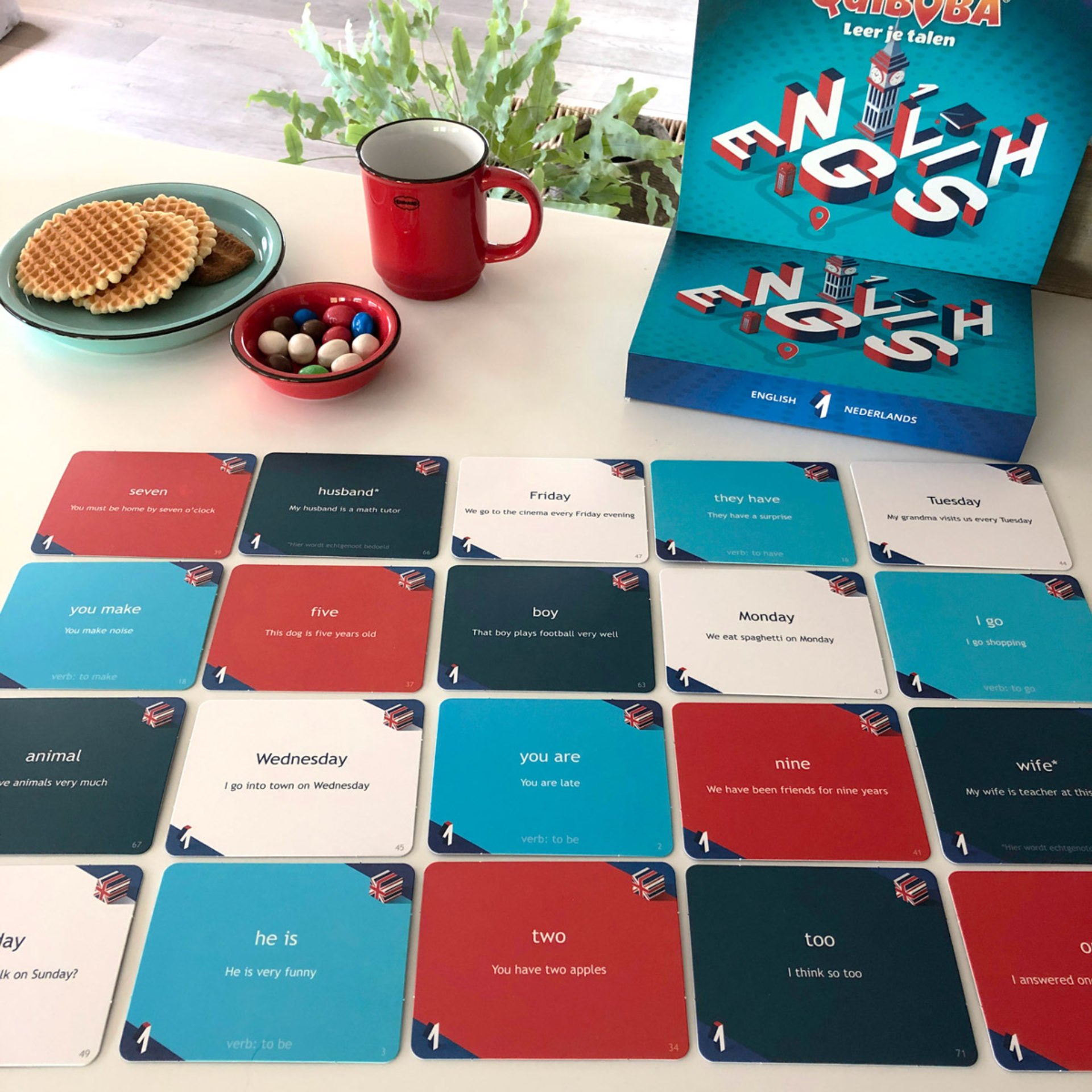 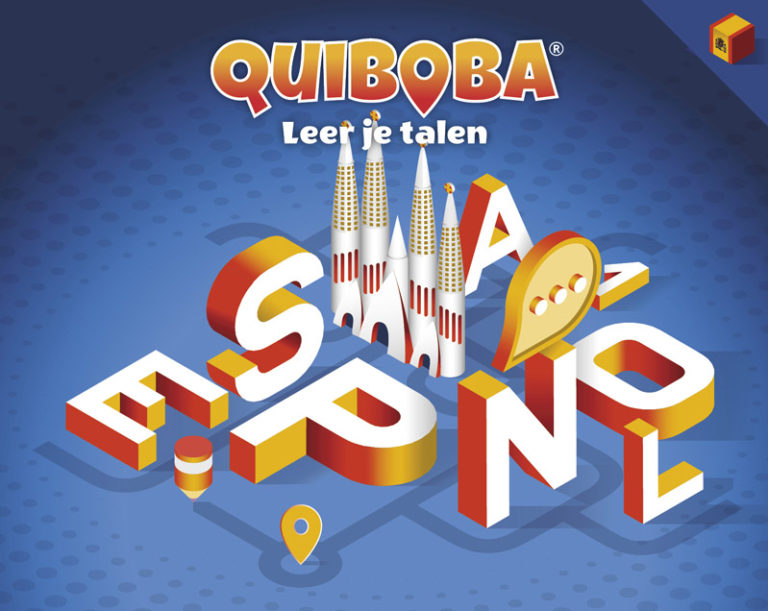 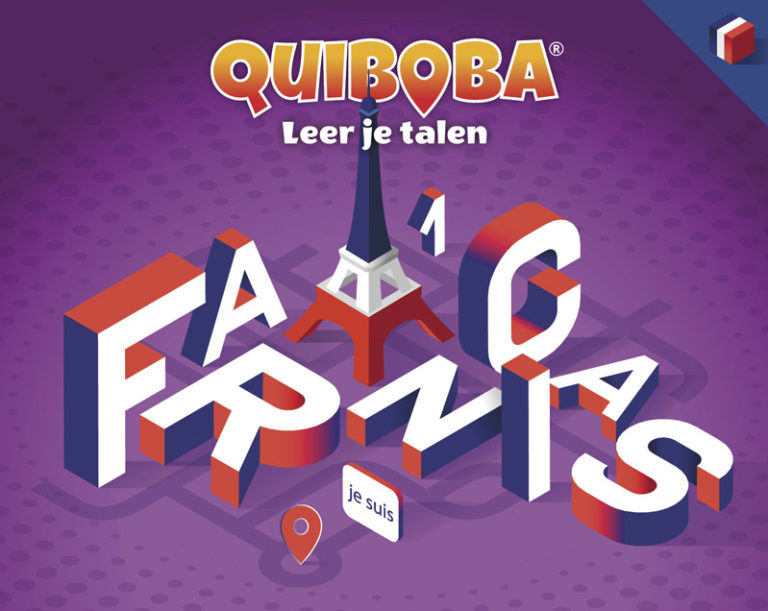 The Quiboba language game is unique because it is a fusion of hearing, seeing and writing, specifically focused on the basic knowledge of highschool. The website that we have designed and developed fits in perfectly with this. A playful, youthful web design that speaks the right language for the visitor, because conversion and Click-Through Rates are important. Each language game has its own landing page with a full explanation and link to the Quiboba webshop.
Buyers of the Quiboba language game get free access to podcasts, practice material and fun extras on the website via a QR code in the package. The Quiboba game contains the basic knowledge that you need to speak a foreign language. Think of the basic verbs, weekdays, family words, months, seasons, numbers and common words. It has been specially developed with translators and native speakers. With the free practice material and podcasts, you can read the texts, practice the spelling and hear the pronunciation. Everything to teach children a foreign language in a fun and cheerful way.

Each game contains a secret QR code with which you can download the podcast, practice material and fun extras from the game. These free extras are exclusively for the people who have bought the language game. You will find all free extras on the special landing page. We experienced the collaboration as very pleasant

From our very first conversation, there was a click and we were enthusiastic. René understood exactly what we wanted and translated this into a beautiful design for both the website and the product packaging. He was able to empathize with the target group and thereby gave our company a face. We experienced our collaboration as very pleasant. René thought along with the concept but went one step further by adding fun gadgets that made our game even more valuable. His work method is very accurate and correct. We are therefore very satisfied with Stoere Binken Design and we definitely recommend them!